*May not be an exact translation.

This was my first time celebrating Chinese New Year (CNY) anywhere, so I’ll cover the basics for any other first timers. Firstly, it is based on the lunar calendar so the dates change every year. This year it started on Tuesday 5th February and ended on 19th February. So, definitely not in December which is when we decorated our Christmas tree in CNY dragons and piggies. Hehehe.. 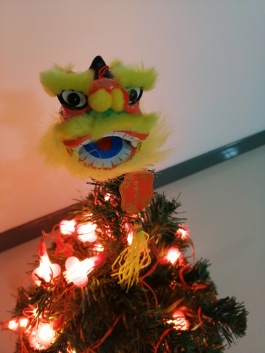 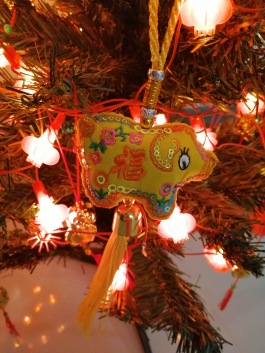 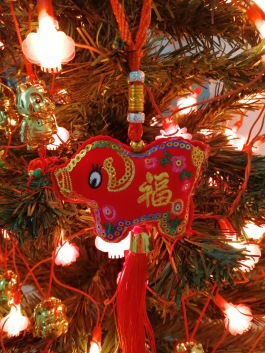 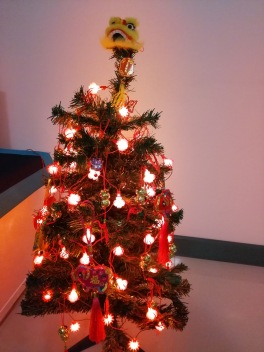 Secondly, each year is based on the Chinese zodiac, and this time it’s the year of the pig! This leads me onto an interesting fact about CNY in Malaysia.

Malaysia is a very multi-cultural society, but is still predominantly Muslim. One of the things that I’ve learned about Muslim culture is that pigs, or at least pork, is haram i.e. forbidden by Islamic law. This means that while the large Chinese population here bloody love pork and all things pig-related, the larger Malay Muslim population hate it. So in Malaysia, the year of the pig is not celebrated with images of the pig everywhere as it would be elsewhere, as this would be offensive to the Malay people. You can buy adorable little piggie accessories and you’ll see them in the Chinese shops and temples, but not in public places, which are decorated with lots of more generic (and lovely) CNY red decorations, flowers and displays of other important figures, like the god of prosperity. He looks quite fat and happy so I like him a lot. 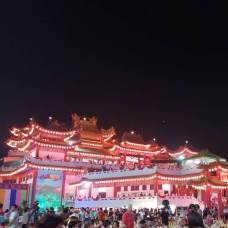 This is Thean Hou temple, one of my favourite places in KL. It has six tiers and is apparently one of the oldest and largest temples in Southeast Asia (sidenote: I feel like a lot of temples claim this fact, but it still may be true). Like most Chinese temples, it celebrates a mixture of Taoism, Buddhism and Confucianism. I love the fact that it’s ok to mix these ideologies in one place, and I’ve heard people who describe themselves as Buddhists here say that it is not necessarily a religion but a way of life that anyone can choose to live by, alongside anything else you might believe in. The Chinese temples in Malaysia are such beautiful, welcoming places and this one perched on a hill over the city has to be one of the best.

The first time we visited Thean Hou was when we first arrived in KL, and it was decorated with yellow lanterns at that time. Just for some daytime pics and a comparison to CNY, here it is in September: 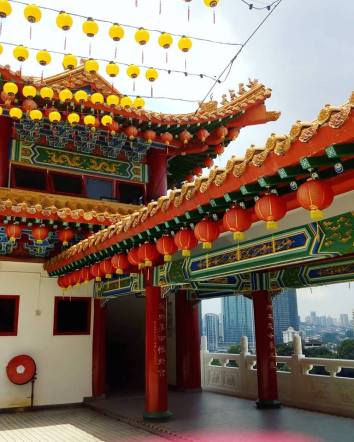 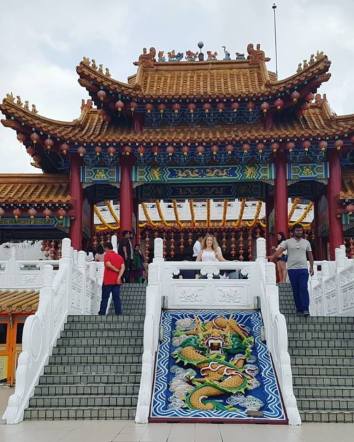 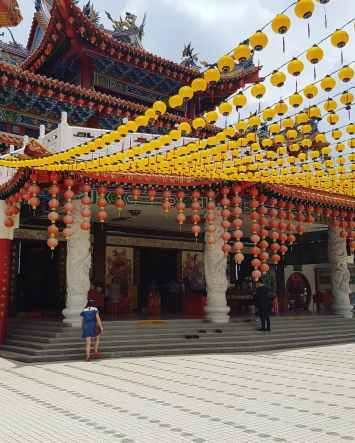 This time, for CNY, it was decorated with red lanterns, the colour of luck and happiness. Isn’t it just gorgeous? 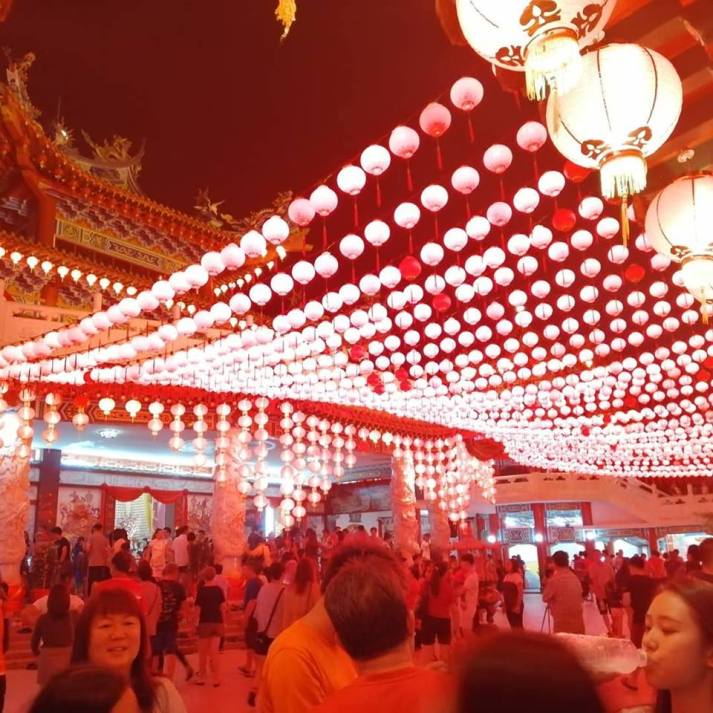 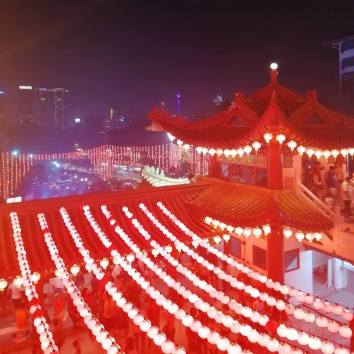 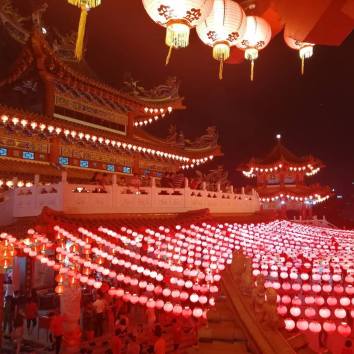 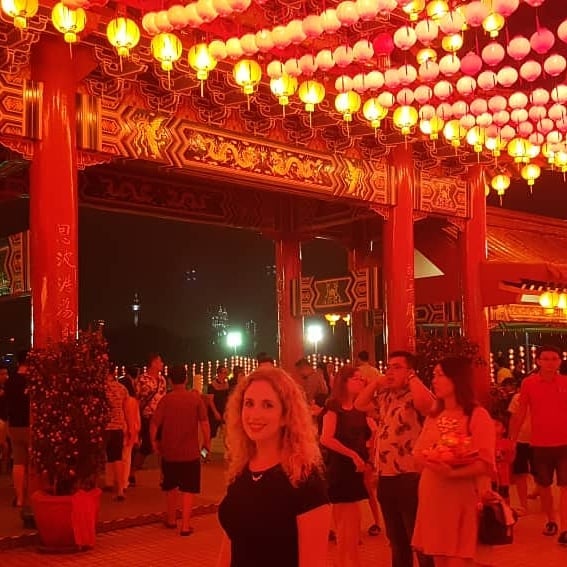 One lovely tradition here over CNY is the “open house”. I actually can’t work out if this is common everywhere that celebrates it, or if it’s specific to the Malaysian Chinese. But what happens is that some Chinese families open their doors for family, friends and strangers to come in and share in their food, drink and revelry to celebrate the new year. We were lucky enough to be invited by someone we know to celebrate with his family.

The traditional gifts to give at CNY are angpao, little red envelopes with cash inside, and mandarin oranges. We also thought it would be cute to bring something from “home” to our hosts, but that’s hard to arrange last minute in KL, so I hope they enjoyed their unbranded Scottish shortbread with their tea (neither of us are Scottish, but close enough).

Apparently Malaysia has the best dragon and lion dance teams in the world, so I’m sorry that we only got to see one performance, but it was amazing! Overall, Chinese New Year has been a gorgeous, happy celebration in KL and it reminded me that it’s such a treat to live in this multicultural place. 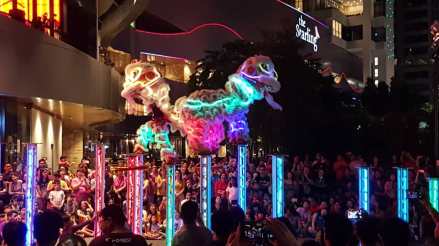 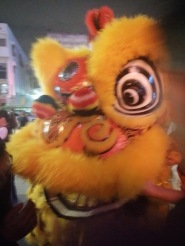 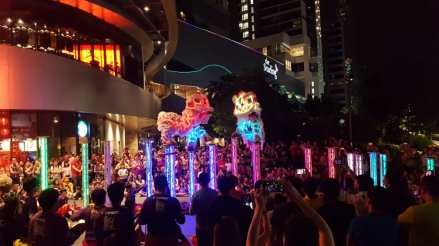 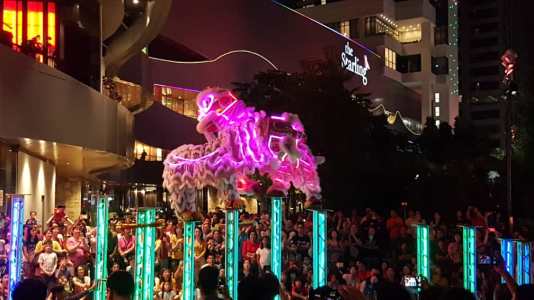 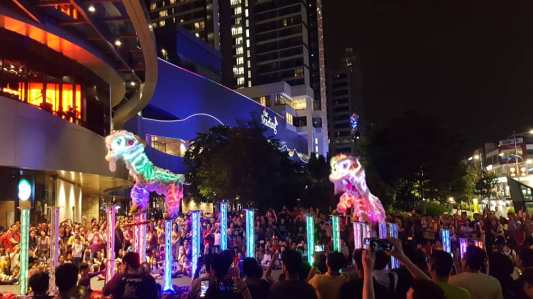