I’m going to start this post with some basic geography. This is not my picture, but I googled it and it amazes me. Indonesia compared to Europe: 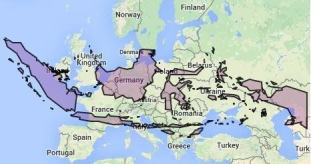 HUGE! Java is the relatively small island stretching out across the south of France in that image, and this island alone has over 141 million people (the UK only has about 66 million). Surabaya is in Java and is the second biggest city in Indonesia, which means it’s absolutely massive. We decided to travel there by train. Choo choo! All aboard the Surabaya express!

Ok, it wasn’t an express, but it was a train and it took 4 and a half hours from Yogyakarta. I  love long train journeys so was pretty excited about this, and it turned out to be even more fun than expected.

The station at Jogja is hectic and when a train pulled in, at the exact time our train was due, at the exact platform where it was due, we were told not to get on, because it wasn’t our train. We were pretty sure it was our train but have learned to trust people more than official schedules by now. They were right, our train actually appeared about 20 minutes later, but I’m not sure how we would have worked that out if I hadn’t kept asking people. It wasn’t announced or displayed anywhere. Anyway, I bounced on board prepared for some chill time with my kindle and some podcasts at the ready, but bringing my own entertainment wasn’t necessary. The train had comfy seats, more leg room than I’d ever need, and they were showing episodes of what I assumed to be the Indonesian Thomas the Tank on screens. And that’s not even the best part. They also served food, but we didn’t have to walk to the carriage serving it like schmucks. No no no. Just whatsapp them with your order and they’ll come and serve you at your seat! One of the big differences between Indonesia and Malaysia is that fewer people speak English here, and we can get out of our depth trying to communicate in Bahasa Indonesian. So sometimes Google Translate still makes me LOL hysterically on a train while trying to order a hot chocolate: 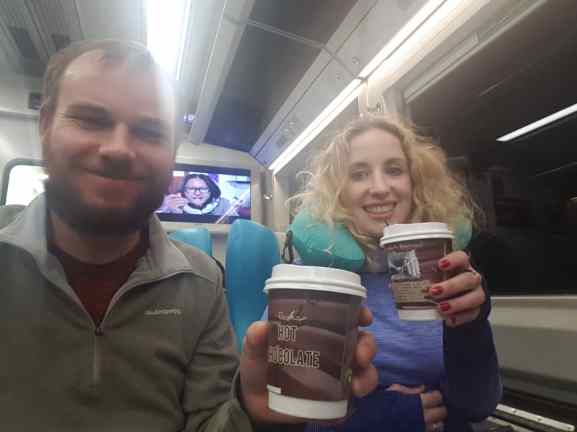 Surabaya itself is underrated in my opinion. Even taxi drivers and people we met there said if someone asks what there is to do in Surabaya, they say “nothing”. But it’s just not true! It’s definitely a good place to go if you’re interested in Indonesian history. The museums are a little bit weird, like the cigarette factory that for some reason inserts a small section on the evolution of man itself into the story of the evolution of the tobacco trade. This was the House of Sampoerna, which was genuinely an interesting place to spend a few hours learning about the man who started this business, his rags to riches story, the evolution of man (of course) and the tobacco trade, and you can see the workers still packing the cigarettes in the working factory today. It even inspired me to take up smoking (not really).

Another point of interest is the Heroes Monument, which celebrates Indonesian independence with some serious attitude. ALLIED FORCES GO AWAY! Fair enough.

Speaking of allied forces, the museum at the monument mainly focuses on the Battle of Surabaya, fought between Indonesian independence fighters and the… British. Knowing that Indonesia was a Dutch colony, this greatly confused me. What the hell were the British doing there? And why did I have to say I was from the UK to the girl at the door? How embarrassing. The museum does a great job of casually celebrating child soldiers who fought for Indonesia and also not explaining what the British were doing there in the first place. I assume most people would also know that this was a Dutch colony and be confused by the context surrounding this battle, but we had to resort to our own online research to get a proper explanation (and it still doesn’t make much sense, but that’s certainly not Indonesia’s fault).

My favourite story from this museum was the story of the flag (you can take the girl out of Northern Ireland…etc.) Some young fighters climbed on top of the Yamato Hotel in Surabaya, took down the Dutch flag, ripped off the blue strip at the bottom, and hoisted it up again as the Indonesian flag (the remaining red and white stripes). Although it seems like the red and white flag was used before this by an old 13th century empire in Java, the ripping of the Dutch flag still happened, and I love the symbolism.

Other interesting things to do include the Arab quarter, where you can buy all the dates and Muslim fashion you’d ever dream of, sunset by the harbour, Chinese and Hindu temples, and some rooftop bars. I thought it was a pretty cool city with a nice vibe. We made a bunch of friends too which really made our experience a bit more special, although it’s basically impossible to not make friends here as the people are ridiculously nice. By the way, if you’re getting bored with me just loving everything and having a great time, sit tight. It doesn’t last. But can I get a WOOP WOOP for Surabaya (and these explicit Neanderthals from the cigarette factory)?

One thought on “Next stop, Surabaya!”